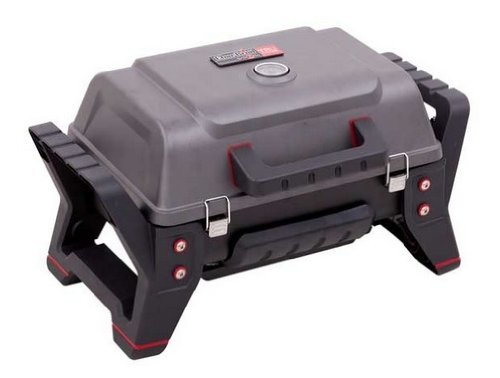 When you’re grilling on the go, whether it’s before the game, before the swim, or before the campfire sing-along (if that’s your thing), time is of the essence. All you want to do is get some good grilling done and get back to your business! How about a portable high-speed grill so you don’t miss your turn on “Row, Row, Row Your Boat”?

Char-Broil claims to have you covered with this cool (and hot) little number that reaches cooking temperatures in super fast time!

So why did we choose to focus on this model? Two words: infrared cooking. And we love this grill so much that it’s also included in our ranking of the best infrared grills.

With infrared, the food is almost completely separated from the open flame by a special screen built into the grill. Air and heat pass through, but not the flame. The result is high, evenly distributed heat, which prevents flare-ups.

The Grill2Go is built tough for travel, no doubt. Double latches keep the lid closed, and the cast aluminum box and lid are rough and tough. The short legs feel sturdy, as do the two carrying handles.

A push-button electric igniter brings the burner to life, delivering 9,500 BTUs. That doesn’t sound like much, but the infrared technology more than makes up for it by generating a ton of heat.

According to some, it even produces too much heat. Some reviewers report burning their food several times because they left it on a little too long. Obviously, it’s not always easy to control the temperature, and some customers have reported reaching temperatures of 600F and higher.

Still, if you’re looking for speed, you shouldn’t close the lid and walk away. The goal is to grill and get out as quickly as possible.

Overall, the number of satisfied customers far outnumbers those with problems.